Measuring body fat is an important metric that gives insight into body composition. It represents the percentage of body weight that is made up of fat as opposed to lean body mass (or LBM).

There are many ways to measure body fat and calipers are one practical tool that's cheap to buy and can be used at home to take this measurement. 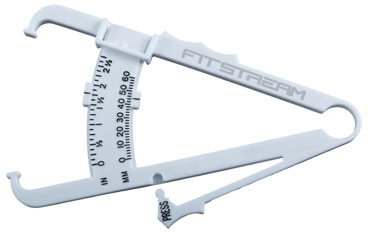 Calipers don't actually measure your body fat percentage directly but are used to measure the size of skin folds in various locations in the body.

Then, by using one of a number of different formulas these measurements can be turned into a body fat percentage estimate.

This is also commonly known as the 'skinfold test' or 'pinch test'.

How many measurements are taken and the locations measured will depend upon the skinfold method being applied. Commonly used methods include;

How to Take Measurements Using Calipers

Technique is important when using calipers to take skinfold measurements. We have compiled these guidelines to help take more accurate caliper measurements;

The different skinfold measurements sites used by the various methods are listed below;

Now that you know what calipers are, how they're used, and of the different measurement sites we're going to introduce you to some formulas to produce your actual BF estimate.

There are actually over 100 different formulas out there. Each equation relates to different populations, ages and characteristic types which skew the statistical model output. Obviously it's best to use a formula that more closely matches your own profile. We've chosen two of the most popular formulas used which should work for most of our readers.

Also note that there are many calculators online that will take your measurements and give you your end body fat estimate automatically. What we're actually doing is showing your formula behind the scenes to give you insight into the factors at play.

The Jackson-Pollock formula is a commonly used and validated method that uses skinfold measurements to predict body fat.

There is an equation for men and women and two variations to the method which involve either taking 7 measurement readings or 3.

We're using the 7 site measurement method in the example below (2) (3).

Note that the formula above is the 7-site Jackson Pollock method because it involves taking 7 different body measurements that are then entered into the formula.

There is also 4-site and 3-site Jackson Pollock methods which require fewer measurements (but are less accurate as a result). The measurement points for these methods are shown below;

The Parillo equation for estimating body fat is another simple skinfold measurement method but it requires nine different body readings and has no gender differentiation.

We've created the chart below to help illustate the calculation process. Here are the steps to populate it:

Note that this chart is based on the Parillo equation and therefore captures 9 different measurements. If you use a different equation simple add or remove the appropriate measurement sites.

If you populate this table for yourself you will probably find that there is variance between most of the site readings (M1, M2, M3). Therefore the body fat % output will vary between these columns. By taking average readings of M1, M2 and M3 we can help smooth out the inaccuracies.

The value you now have is probably good enough for most people, but if you want to take things a step further to  check accuracy you can work with your average highest and average lowest readings too as we've captured in the table above.

These two values represent your best and worst case body fat % range. If you take an average of your highest and lowest body fat, this should be very similar to the first average you calculated.

The Fitstream Body Tracking tool is free to use and designed to track all important body metrics and capture body photos. You can build a story of how your body is changing over time.

Thousands of people around the world are using are system to stay motivated and inspire others with their progress.